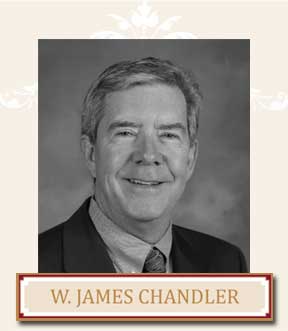 Jim Chandler graduated Oak Ridge Military Academy, received his undergraduate degree from the University of North Carolina at Chapel Hill, and his Doctorate of Jurisprudence/LLB from UNC School of Law.

Jim Chandler completed a tour of duty with the U.S. Army, including Vietnam service (1968-69) and began the practice of law in Charlotte upon his discharge from active duty. His areas of practice were and remain serious personal injury, products liability, professional malpractice, wrongful death, and securities and financial mismanagement. He has served as lead trial counsel in more than 300 jury trials.

Jim Chandler is rated AV Preeminent by Martindale Hubbell, the highest possible rating for both legal ability and ethical practice. He has been selected A North Carolina Super Lawyer by Super Lawyers Magazine and a member of the Top 100 Trial Lawyers by the American Trial Lawyers Association.

Jim Chandler is licensed to practice in all Federal Courts and before the United States Supreme Court since 1971. His interests outside the practice of law include whitewater paddling (in the 1996 and 2000 Olympic Games he was a sponsor of the United States Canoe and Kayak Team), golf (former Mecklenburg County Amateur Champion and North Carolina Open Champion), tennis, fly fishing and photography. He is married to Cathinka Kampen Chandler, a native of the Netherlands, and they reside on Queens Road in Charlotte.